Foreign Ships in Micronesia: A Compendium of Ship Contacts with the Caroline and Marshall Islands, 1521-1885

"The enormity of [Hezel's Foreign Ships in Micronesia] is daunting. Beginning in 1522 with the sighting of two small islands in the Carolines from the Spanish ship Trinidad of Magellan's fleet, and ending in 1885 with the flag-raising missions of the German men-of-war SMS Albatros and SMS Nautilus, there are over 1,700 separate entries for the intervening years and a bibliography listing 439 sources, in five languages, ranging from near-illegible whaling logs and the massive German ethnographies on the one hand, to journal articles and scholarly monographs on the other, interspersed with contemporary traders' accounts and missionary reports, and much else besides. Yet a shipping list is not only useful for the information it contains, however accurate and comprehensive, but for the imagination and forethought which goes into its making. The is the creative side of such work--devising organizational criteria and presenting the information ina way most useful to users.

The individual entries contain six items of basic information, subject to their availability--namely the type of vessel, its name, its hailing port, the purpose of the voyage, name of the captain, and the dates of arrival at and departure from the island(s) visited. This is followed by a neat commentary on the visit, summarizing information of ethnographic interest, and finally a listing of the author's sources. But even when the information has been tracked down the identity of the island(s) in question are still sometimes in doubt, especially for the period before chronometers came into general use. for many of the earlier entries Hezel has therefore had to identify islands from vague descriptions and inaccurate longitudes, or no longitudes at all."
Doug Munro, The Great Circle

"'It has all the excitement of a dictionary,' said the author. And everyone in the seminar laughed. But you won’t laugh at the book in question here unless it is one of those chuckles of wonderment which we all occasionally flash when impressed by a feat. Foreign Ships in Micronesia: A Compendium of Ship Contacts with the Caroline and Marshall Islands, 1521-1885 by Francis X. Hezel, SJ, is really quite an accomplishment. It has been over ten years in the making...Although Foreign Ships in Micronesia is not a book most people would read for pleasure, the Micronesia-phile can nevertheless get some fascination from randomly thumbing through it and letting his imagination wander at some entries."
Dirk A. Ballendorf, Commonwealth Examiner

"The book contains chronological listings, supplemented with brief notes, of ships visiting or sighting islands in the present districts of Palau, Yap, Truk, Ponape, Kosrae and the Marshalls. The Marianas were excluded, Fr. Hezel explains, because of the "very different historical forces that were operating on those islands during the period in question." Elsewhere, however, the individual trade or whaleships called, bartered, sometimes cheated or was cheated by the islanders, sometimes knowingly or not left behind a beachcomber or two, sometimes dealt peacefully and other times not, and then sailed on again.

Foreign Ships in Micronesia represents lengthy and painstaking research conducted in many places, using both published and manuscript sources in great numbers. The bibliography is a long one, and a fine road map for anyone wanting to pursue any of the seductive byways which appear in the chronology."
Mary Browning, Kwajelain Hourglass 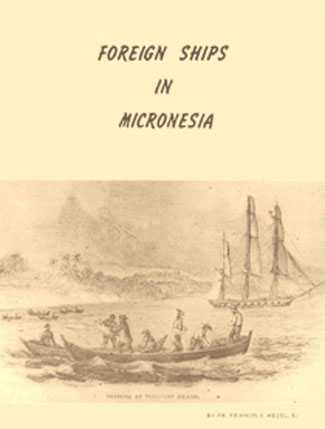