For as long as people have lived in these islands, there has been government. After all, government is simply the way in which power and authority are organized in a society. Any community must have its leaders, rules of conduct, and the authority to enforce those rules. They are as important for the well-being of the community as food cultivation and housing.

This textbook presents a look at the government in the Federated States of Micronesia, as it exists now and as it has developed over the years. That's why it is entitled "Micronesian Government: Yesterday, Today, and tomorrow." In this book students learn about the system of government in the islands today, and how the government came to be the way it is today.

Government did not begin with the arrival of the first foreigners. Government is as old as the Micronesian people themselves. Long before the first legislature was formed or the first governor was appointed island people had been governing themselves. Hence, this book begins with the traditional government in the different parts of the FSM and the way in which the traditional systems operated. Students see how leaders exercised their power, but also how ordinary people influenced the decisions that were made in their communities. 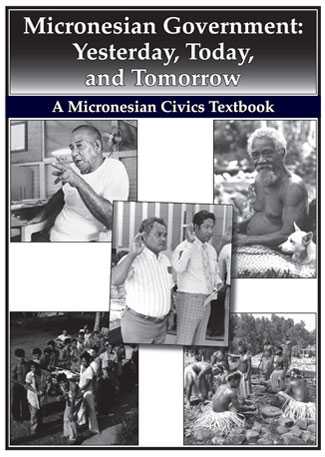