Strangers in Their Own Land: A Century of Colonial Rule in the Caroline and Marshall Islands

"The tale [of Strangers in Their Own Land] is one of interplay between four sequential colonial regimes (Spain Germany, Japan, and the United States) and the diverse island cultures they governed. It is also a tale of relationships among islands whose inhabitants did not always see eye-to-eye and among individuals who fought private and public battles in those islands. Hezel conveys both the unity of purpose exerted by a colonial government and the subversion of that purpose by administrators, teachers, islands, and visitors...[The] history is thoroughly supported by archival materials, first-person testimonies, and secondary sources. Hezel acknowledges the power of the visual when he ends his book by describing the distinctive flags that now replace Spanish, German, Japanese, and American symbols of rule. the scene epitomizes a theme of the book: global political and economic forces, whether colonial or post-colonial, cannot erode the distinctiveness each island claims."

"Hezel has written an authoritative and engaging narrative of [a] succession of colonial regimes, drawing upon a broad range of published and archival sources as well as his own considerable knowledge of the region...Hezel demonstrates a fine understanding of the complicated relations between administrators, missionaries, traders, chiefs and commoners in a wide range of social and historical settings." 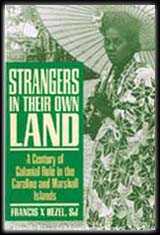